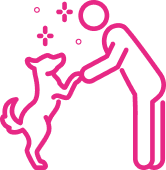 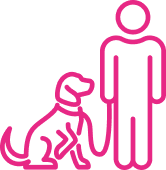 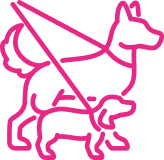 I think realistically you are doing everything correct. Out on walks you need to be consistently giving treats around strangers, even if they are a distance, every time he looks at them give him a treat (using the ‘watch’ command). Reward all calm behaviours straight away. Try and create space if necessary using the ‘turn’ command and getting him to a safe location with a greater distance if required.

I would suggest the people that stop you to tell you how cute Murphy is (which I suspect happens alot) instead of them going down to him and trying to get into his space just explain as you do already that he is shy around people and say instead of trying to talk to him the best thing you can do for him is throw a treat down to him.

With the ‘watch’ and association of seeing other people as a reward and then the reward of others throwing treats down hopefully he will start to see people more as a positive than a negative.

I think with Murphy the main thing is to ensure he has the space he needs so he can make the choice to back away or move forward if he wants too. Try and focus more on the calm behaviours and be ready to praise them and where possible try and ignore the unwanted behaviours.

I would say choose the people wisely as you need someone that will follow your guidance, even if it is a case of asking every friend or family member to be out at the same time so you can plan to walk into them and practice with the treat throwing. Just make sure they throw his all time favourite treats.

As they go to walk away get them to throw treats for him (just as we do with the standing up at home) so he is then again getting a positive association but instead of going in for a nip he is getting distracted by the treats instead.

The more games and training you continue to do will also be of huge help. I wouldn’t be overly fussed if he does choose to hind behind your legs, the main thing is to ensure we respect his decision of wanting space and make sure other people do not try and invade that space.

I hope that has answered your question

Anything else then please ask

Tim, we just wanted to say a great big thank you for the marvelous job you have done with Rea. When we saw her this morning we couldn’t believe the difference in her, she looks like half the dog we used to have:-) ​We are well impressed​ with what you have done and have already recommended you to a friend of ours who is looking for a similar service for her dog.
Andy Robinson
Thanks so much for looking after Socks, taking in mail, clearing up etc. A really first class service.
Peter Fairhurst
Daisy loves the puppy class and when she sees where shes coming she gets so hyper which is nice to see. Myself and Kris have learnt a lot of dog information that we needed to know. Happy clients
Mr/Mrs Reatt
Colin and I have really enjoyed the classes. Great opportunity to meet and socialize with other dogs. I have the knowledge and confidence to continue with Colin’s training in the future. Very enjoyable all round.
Ann Dunkerley